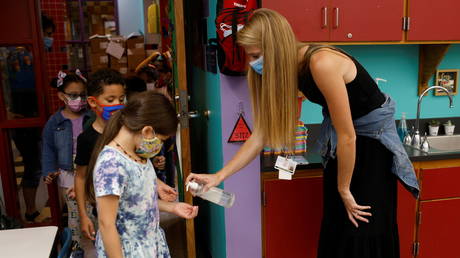 A federal judge has blocked President Joe Biden’s vaccine and mask mandate from being enforced at a program for low-income families, deeming the requirement for children to be masked and staff vaccinated unconstitutional.

Judge James ‘Wesley’ Hendrix ruled on Friday that the Department of Health’s vaccine and mask requirement for those involved with the Head Start program – which provides “education-related services to needy children” – was “unprecedented” and lacked Congressional approval.

“It is undisputed that an agency cannot act without Congressional authorization. Thus, the question here is whether Congress authorized HHS to impose these requirements,” Hendrix declared.

Calling the mandates “arbitrary” and “capricious,” the judge concluded that they should no longer be enforced.

The state of Texas has been engaged in a lengthy battle with the Biden administration over vaccine and mask mandates, with judges going back and forth over whether they should be enforced.

In October, Abbot signed an executive order banning all vaccine mandates in the state, ruling that “no entity in Texas can compel receipt of a Covid-19 vaccine by any individual” and that vaccines “should remain voluntary and never forced.”

A federal judge ordered United Airlines to halt its Covid-19 vaccine mandate that same month, while in November, Biden’s vaccine mandate for businesses was halted after the Texas Attorney General filed a lawsuit.

In November, however, a federal judge overturned Abbott’s ban on school mask requirements.

12 people dead in a crowd surge at a popular Hindu shrine in Kashmir : NPR